Hemp plants are a real treasure trove of natural compounds. Some of them make us feel lost in the world, others soothe even the most troublesome of conditions. However, most of them still require a lot of research to know them a little better. Therefore, we’ve decided to dedicate this article to one of the most popular cannabinoids, one which still has a dubious reputation. Meet THC.

While many of us think THC is found in cannabis, these plants actually contain tetrahydrocannabinolic acid (THCa). THCa becomes THC during the decarboxylation process which occurs through heating.

The history of THC begins in 1964, when, thanks to Mechoulam, THC was isolated and synthesized from Lebanese hashish. This gave rise to further research on cannabis, resulting in the discovery of many other cannabinoids.


Occurrence of THC in hemp plants

The concentration of THC in cannabis plant is mainly determined by the variety of the plant, the way it is grown, the fertilizers used on cannabis crops, and various other factors, all of which cause that the concentration of this substance in hemp can oscillate between 0.2 and 0.5% in the case of industrial hemp, up to even 20% in specialist cultivated indoor varieties.

How does THC work?

Tetrahydrocannabinol stimulates cells in the brain, leading to the release of dopamine which can often result in a feeling of euphoria. It also affects the hippocampus, which, as part of the brain, is responsible for the formation of new memories and overall memory function. THC can change the way you see and think. Its effects last on average about two hours, and you can feel them about 10-30 minutes after consumption, depending on the method of intake.

Although the popularity of THC is mainly based on its intoxicating effects, this compound also has many medicinal properties. THC may have a positive effect on:

Taking medical properties in good faith may not be the best idea. Therefore, it is worth familiarizing yourself with what science has to say on this matter.


Sleep
A 2017 review of studies on THC and sleep noted that there are mixed results for THC and sleep. Some studies show that THC can negatively affect sleep quality, while, on the other hand, others seem to confirm that this substance can moderate insomnia.

However, scientists have unanimously proven that tetrahydrocannabinol can reduce the amount of time we spend in REM sleep, which is the stage of the sleep cycle where we dream. This can potentially help patients with post-traumatic stress disorder (PTSD) to get a good night's rest if they are often plagued with nightmares.


Eating disorder
An uncontrollable urge to snack after taking THC can also bring a lot of good. This often annoying side effect can be beneficial for some people. Marinol, sa synthetic version of THC, is prescribed to patients with HIV / AIDS who are very often affected by a lack of appetite which can lead to malnutrition in the long run.


Chronic pain
In the USA, medical marijuana is usually prescribed for chronic pain, which translates into statistics according to which 62% of medical cannabis users use it to treat pain. Tetrahydrocannabinol is attributed to the greatest analgesic properties, which is also confirmed in numerus research.


Anxiety disorder
THC can also have a positive effect on reducing anxiety. However, there is a fear of it also having the opposite effect. According to research, THC may lead to a paranoid state for some people, although researchers are still unsure why it can cause such extreme opposite effects.

From a chemical point of view, THC and CBD are almost identical; these are structural isomers whose chemical composition is written with the same formula. The difference lies in the arrangement of atoms - both compounds have a cyclic structure, consisting of rings. In CBD, the open ring associates with a hydroxyl and alkyl group, while THC has a closed ring with an ester group. This may seem a minor detail that only chemistry freaks will pay attention to, but this small difference affects the diverse physiological effects of these compounds; they enter into completely different reactions with various endocannabinoid receptors in the human body.

THC is responsible for causing strong cerebral euphoria, while CBD does not cause any intoxicating effects. Basically, this is because THC activates CB1 receptors in our brain, while CBD does not. In addition, CBD is a cannabinoid blocking the mind-expanding effects caused by tetrahydrocannabinol.

Both tetrahydrocannabinol and cannabidiol are characterized by a wide range of medicinal properties. Increasingly, both of these substances are used where conventional medicine does not have much to offer patients. Each of these compounds is specialized in soothing other types of conditions, depending on the specifics of their actions.


Persistence of THC in the body

The easiest way to check the length of persistence of THC in the body is by oral smear test. However, this method is only effective for about 40 hours from consumption. THC in saliva stays for the shortest time.

Measuring the concentration of the substance in the blood can be effective too. Blood THC tests are very rare - usually in emergencies such as traffic accidents. They allow a better assessment of whether the examined person is currently under the influence of THC. For occasional consumers, THC can persist in the body for 2 to 3 days. However, for people who regularly take THC, this time can be extended to up to 2 weeks.

When it comes to the persistence of THC in the urine, it cannot be clearly determined. The rate of THC metabolism is different for each person. However, the average THC content in urine is as follows:


Interestingly, you can check the presence of THC in your body with the aid of one hair. That's all it takes to detect THC. Usually, a sample is taken with a diameter of about 0.5 cm from the occiput area. Assuming that the average hair growth is 1 cm per month, a 10 cm long hair will give information on the consumption of THC in the last 10 months. 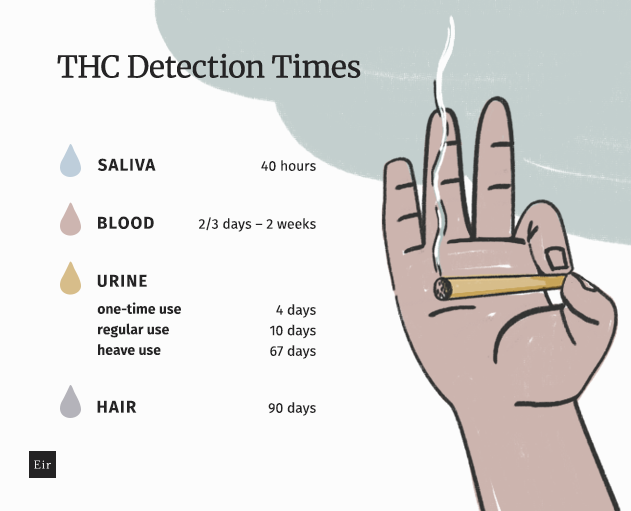 Side effects of THC

In addition to its medicinal properties, THC is known for the side effects that are associated with taking this substance. THC may cause hallucinations and phantasies and change your thinking. These effects last on average about two hours after consumption. However, psychomotor impairment may still persist after the psychoactive effect has subsided. Simply put, THC works by binding to cannabinoid receptors concentrated in the brain and central nervous system, causing intoxication.


The impact of long-term THC intake on the body

There is very little evidence to support theories about the effects of long-term THC intake. Research is constantly being carried out which increasingly leads to inconclusive results. However, they are usually carried out for effects such as:

Anatomical brain changes
There is a kind of connection between frequent consumption of high doses of THC and anatomical changes in a part of the nervous system called the corpus callosum, which connects the two brain hemispheres. People who regularly use significant amounts of THC may show differences in the microstructure of the corpus callosum compared to occasional consumers and those who have never consumed cannabis.


Memory deteriorationi
According to a a study published in 2013, THC may impair memory functions. However, it is not clear whether this effect can last longer than the duration of THC's effects on the body. In the long term, this impairment may also persist after stopping THC consumption.


Psychosis
There is a real correlation between the occurrence of certain psychotic states and paranoia and long-term intake of THC. However, this only applies to people who have a natural tendency to develop conditions such as depression and schizophrenia. This means that the substance more likely does not cause disorders, but only accelerates their occurrence.

Although more and more is said about the dangerous side effects of THC, a lethal overdose of this substance is practically impossible. This is because the brain, when exposed to THC, produces a hormone called pregnenolone at levels 3000 times higher, which inhibits THC. By binding to cannabinoid receptors, THC leads to the release of pregnenolone, which in turn weakens the effect of THC. This is called negative feedback and prevents marijuana overdose. This is why marijuana is a safer alternative to opioid analgesics, which are responsible for the US overdose epidemic.

Cannabinoids, including THC, are substances with relatively low addictive potential. This is indicated by a relatively small number of addicts in relation to the number having any contact with marijuana.

In fact, this substance is not physically addictive in the same way as heavy drugs. It mainly causes mental addiction. We are then dealing with certain biological phenomena, such as stimulation of the nervous system resulting in increased secretion of endorphins, a "natural drug". Mental addiction is primarily about a certain pattern of behavior that pushes aside care and provides pleasure. This pattern may gradually limit other ways of dealing with problems. The same applies to the use of THC, which strengthens the received stimuli, and at some point, the addict just starts missing something.


Is it difficult to become addicted to THC?

As with most addictions, everything depends on an individual’s biological and psychological predispositions. However, it is widely believed that lonely people are most susceptible to addiction. Relationships, family, marriage, and having a child can all reduce the need to change consciousness.

The fact that most users never experience addiction does not mean that it doesn't exist at all. Some marijuana users exhibit all the classic behavior of an addict such as: 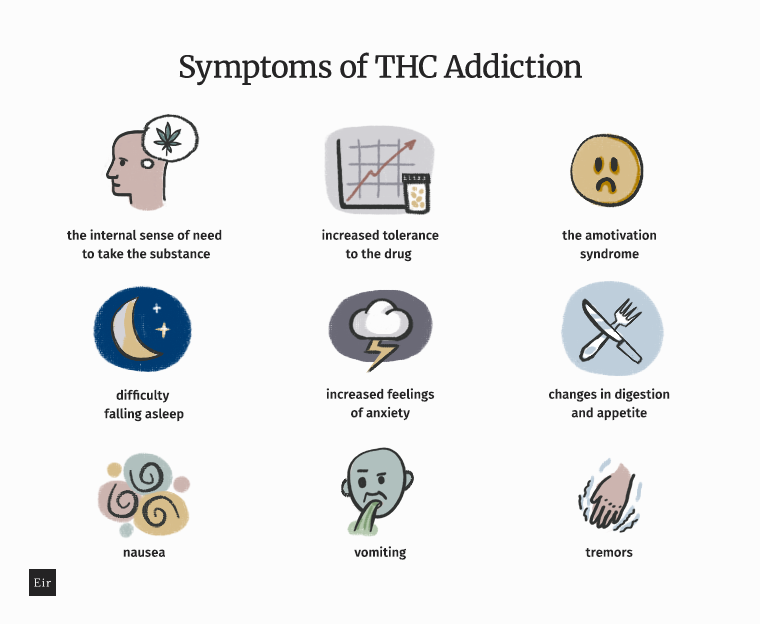 THC as has huge medical potential. Although tetrahydrocannabinol is particularly known for its intoxicating effects on the human body, more and more research confirms its health properties, opening the door to THC-based medical careers. The low probability of overdose and the relatively low addictive potential make this compound more and more helpful for people struggling with troublesome conditions such as insomnia, anxiety disorders, and post-traumatic stress disorder (PTSD). In addition, there is very little specific evidence to support theories about the effects of long-term THC intake. This situation can have a calming influence on people who started their adventure with THC some time ago, and so belong to the group of tetrahydrocannabinol old birds.


You will find THC in our full spectrum oils.
Choose one of the Eir Health products: