These compounds are thought to work together to enhance one another’s effects in what is known as the synergistic or entourage effect. The entourage effect describes the cooperative activity of the cannabinoids and terpenes in the cannabis plant to produce an effect that is qualitatively different than that of any one compound.


The simplest example of the entourage effect is the synergy between THC and CBD. People who consume THC and CBD at the same time experience fewer side-effects from the THC than people who use it alone. Full-spectrum cannabis products like Sativex are popular in the medical realm for this reason. A 2011 survey reported that 98% of patients preferred full-spectrum cannabis to THC-only medication.


Of course, the cannabinoids and terpenes in full-spectrum CBD products also have effects on their own, regardless of their synergistic effects together. This means that full-spectrum products open you up to a whole host of potential benefits from cannabinoids, terpenes, and their combined effect with CBD.

What Is Full Spectrum CBD Oil?

Full-spectrum CBD oil is a CBD product which contains CBD and other compounds from the cannabis plant.

Cannabinoids are active compounds found in the cannabis plant. They bind to cannabinoid receptors in the nervous system. The compound THC is a cannabinoid known for causing the euphoric marijuana high.

While THC and CBD are the most well-known cannabinoids, there are at least 113 other cannabinoids in the plant. These include CBN (cannabinol), CBC (cannabichromene), and CBG (cannabigerol), among others. These compounds occur in lower concentrations than THC and CBD. 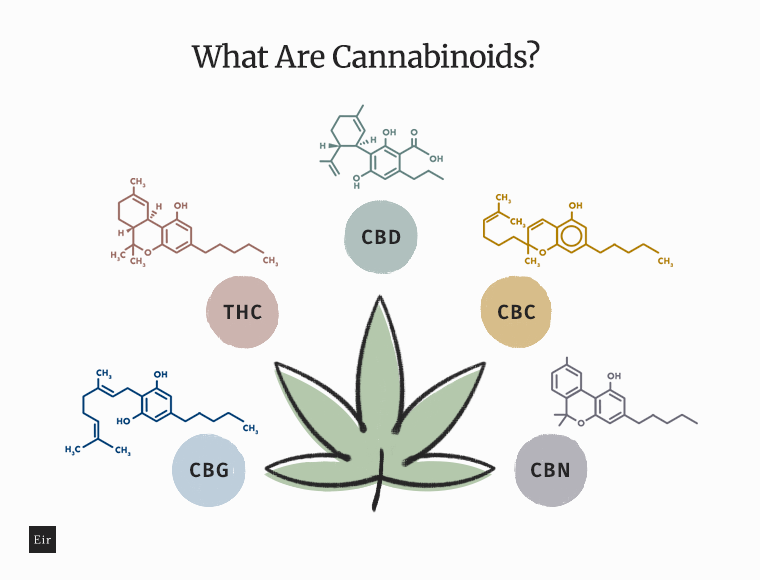 These minor cannabinoids have their own effects on the body, but they are also thought to work together to produce synergistic effects. In other words, scientists believe compounds like CBD may be more effective when combined with the other co-occurring compounds in the cannabis plant, rather than as an isolate.


Cannabinol (CBN)
CBN is formed when THCA (the inactive form of THC) breaks down over time. It is found in higher concentrations in older batches of marijuana. CBN appears to have antibacterial, anti-inflammatory, and pain-relieving effects. It is also thought to be one of the most sedative cannabinoids.


Cannabichromene (CBC)
Like CBD, CBC is a non-psychoactive cannabinoid. It has antibacterial, anti-inflammatory, and pain-relieving effects. It may be useful in treating acne.


Cannabigerol (CBG)
CBG is a precursor molecule for many other cannabinoids, including THC and CBD. Like CBD, CBG appears to increase levels of the endocannabinoid anandamide in the body. It has antibacterial effects, and may act as a neuroprotective.

Terpenes are scented molecules found in cannabis and other plants. They are responsible for the different aromas in cannabis products, and they also contribute to the effects of the plant. Many terpenes have effects of their own -- such as pain relief, antibacterial, sedation, and anti-anxiety effects -- and they also play a part in the entourage effect. Terpenes are major components of essential oils.

A 2011 review article by Dr. Ethan Russo reported that several terpenes were synergistic with CBD. These include limonene, linalool, pinene, myrcene, and caryophyllene. The author also suggests three scenarios where cannabinoid-terpene synergy may improve outcomes, including the treatment of acne, the treatment of MRSA, and in several psychiatric illnesses. Here, we’ll go over a few of the most common terpenes found in full-spectrum CBD oils and their effects as described in this article.


Limonene
Limonene has a lemony, fresh scent and is common in the cannabis plant. It appears to have anti-anxiety, anti-acne, and immunostimulant properties.


Pinene
Pinene smells like pine trees, and is responsible for the earthy, sharp undertones in the cannabis plant. It is reported to have anti-inflammatory and bronchodilating effects.


Myrcene
Myrcene has a warm, earthy, orangey flavour. It is commonly found in mangoes and hops as well as in cannabis. It is thought to have anti-inflammatory, analgesic, and sedative properties. Dr. Kymron DeCesare, chief research officer at Steep Hill Labs, explains that “myrcene is the major ingredient responsible for ‘flipping’ the normal energetic effect of THC into a couch-lock effect.” This is an example of the entourage effect -- specifically, the combined effect of a terpene and cannabinoid.


Caryophyllene
Caryophyllene has a peppery, spicy scent and is found in black peppercorns. It is thought to have anti-malarial effects and cell-protecting effects. It is not reported to have major synergies with CBD, but in addition to having its own effects, it may work alongside the other compounds in full-spectrum oil.


Mixes of terpenes in CBD oils

To enhance the healing effect of CBD oils, their composition can be enriched with specially selected blends of terpenes, which will give specific properties to the product. Such mixes are for example STV mix found in CBD oil NO.9: Awake and NDC mix found in CBD oil NO.10: Sleep. Both of them have different properties for the organism. The STV mix is responsible for increased concentration as well as a reduced sense of sleepiness, which significantly improves performance during the day. On the other hand, NDC mix helps you fall asleep faster, improving the quality of sleep. This revolutionary approach maximized the benefits provided by natural cannabis used for medical purposes without giving it an intoxicating effect related to THC.


What Are The Benefits Of Full-Spectrum CBD Oil?

There are a number of potential benefits to choosing a full-spectrum CBD oil compared to an isolate. 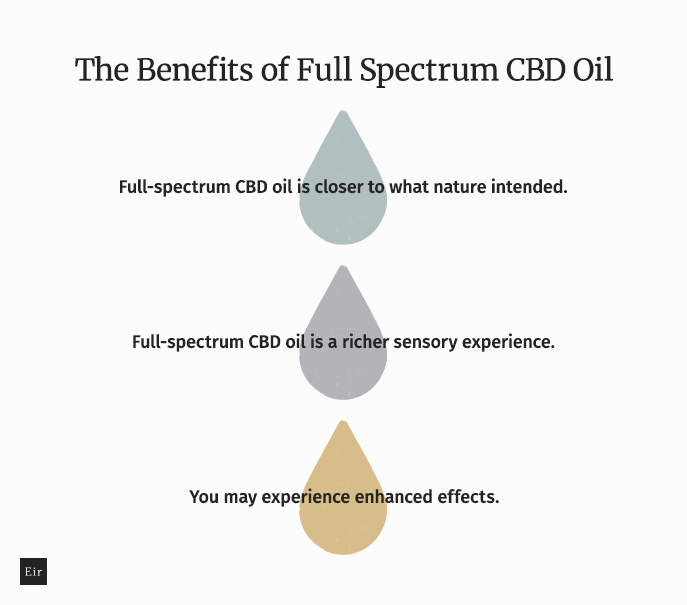 Benefit 1: Full-spectrum CBD oil is closer to what nature intended.
The cannabis plant evolved with hundreds of compounds that work together to produce a variety of effects. It makes sense that the benefits might be most pronounced when these compounds are used together, rather than isolating a single compound.

Choosing a full-spectrum oil is a great way to get the benefits of whole plant medicine without having to use THC or deal with smoking or vaporizing the cannabis plant.


Benefit 2: Full-spectrum CBD oil is a richer sensory experience.
Full-spectrum oil contains a number of cannabinoids and terpenes that contribute to a pleasant flavour experience. From the sharp taste of pinene to earthy, warm myrcene, terpenes add a wonderful, subtle richness to the experience. Of course, some people may prefer a tasteless CBD isolate, but we believe full-spectrum is the absolute best way to experience CBD.


Benefit 3: You may experience enhanced effects.
A large body of evidence suggests that CBD may work better in the context of a full-spectrum CBD oil. Several terpenes are thought to have synergistic interactions with CBD, and there is also evidence that minor cannabinoids work alongside CBD, as well. If you are using CBD for health benefits, it stands to reason that full-spectrum oil will work better.