The cannabis plant is like a box of chocolates; you never know what you’ll get until you take a closer look. This is what makes us appreciate these unusual plants. Seemingly inconspicuous, cannabis hides a host of natural compounds, thanks to which many of us have found relief in many conditions. One of these compounds is CBN - also known as "sleeping" cannabinoid.

Cannabinol is called “the sleepy cannabinoid in old weed.” by many people associated with cannabis. This results in much lower popularity of this compound compared to CBD or THC. Cannabinol still remains quite a mysterious substance, as do other compounds found in cannabis that have not yet been thoroughly tested.

CBN was first named in 1896 in Cambridge by Wood and his associates. However, the correct structure of this compound was only determined in 1940 by Roger Adams.

Although only seven cannabinol derivatives were listed in 2005, the list of CBN-type compounds was updated and now has about 11 different phytocannabinoids, all of which have a CBN aromatic ring. 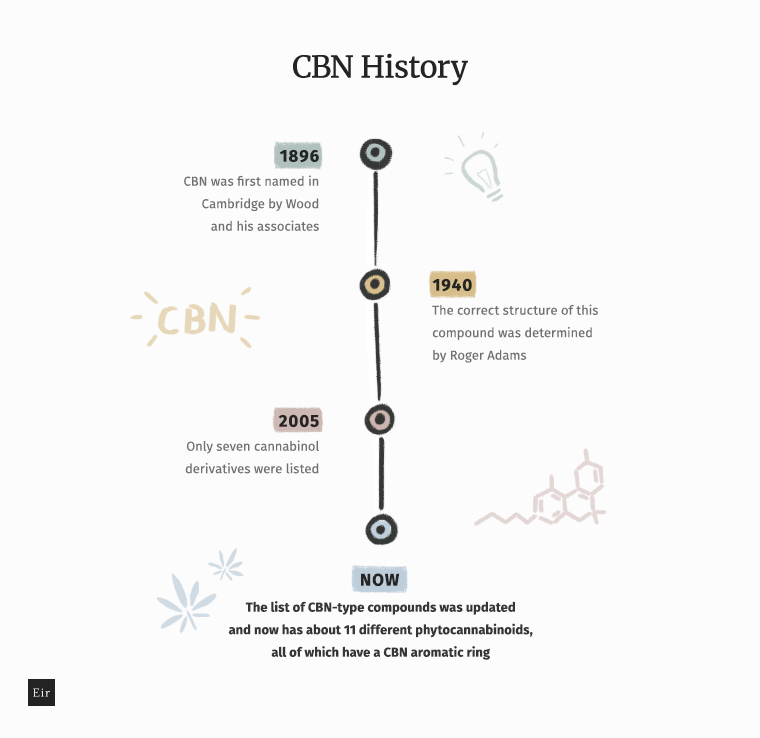 How is CBN formed?

Unlike other cannabinoids, CBN is not derived from cannabigerol (CBG), which suggests a different route for its biosynthesis.

CBN is formed during the aging of THC. It is therefore present in larger quantities in more mature cannabis. Under the influence of the long-term action of oxygen contained in atmospheric air, due to the oxidation process, THC is degraded to CBN. Cannabinol is, therefore, a decomposition product of THC, which occurs under the influence of oxygen or high temperature.

At the molecular level, cannabinol is practically the same as THC. But for the four hydrogen atoms, their chemical formulas would be almost identical.

Consequently, THC is transformed into CBN when storing hemp under inappropriate conditions. To keep cannabis with high levels of THC, keep it in a dark, cool place in a hermetically sealed container. Otherwise, there will be a significant amount of CBN, at the expense of THC, which will completely change the properties of the hemp.

In short, in the long run, THC will transform into CBN each time it is exposed to: 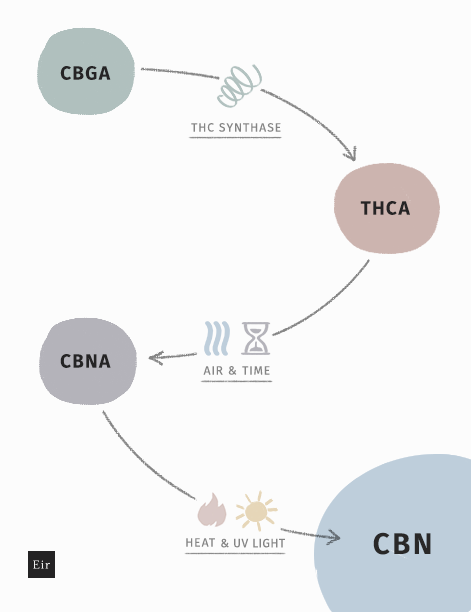 As you can see, no enzymes are involved in this process, which means that cannabis with a higher cannabinol concentration is simply improperly stored.

Although CBN and CBD come from the same plant family, cannabinol and cannabidiol are essentially two different molecules that have two separate sources. CBN is not derived, like CBD, from CBG, but is the result of THC oxidation. 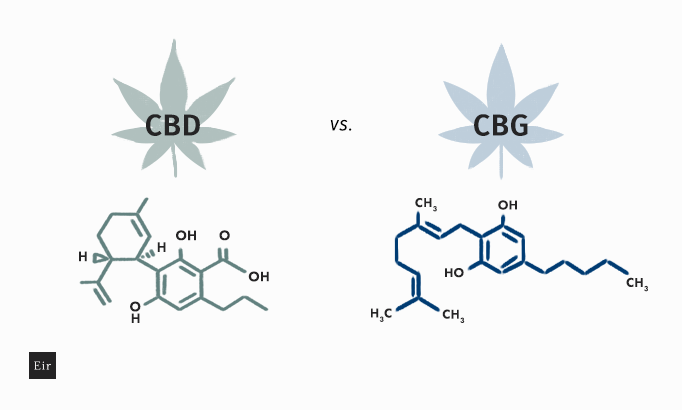 Most cannabinoids interact with receptors connected to our endocannabinoid system. In this way, these compounds can have a wide range of biological effects. Although CBD and CBN have similar genetic structures, CBD affects our system indirectly, through many types of receptors, while CBN has a more direct effect.

CBD is also not attributed to any intoxicating effects. However, CBN is thought to be mildly intoxicating due to its direct association with THC.

As already mentioned, cannabinol (CBN), as well as tetrahydrocannabinol (THC), acts on both CB1 and CB2 receptors. However, CBN has a greater effect on the CB2 receptor than the CB1. Cannabinol also works outside the endocannabinoid system.

Although this cannabinoid is not as well studied as THC and CBD, there are many reports of CBN health benefits. Cannabinol containing products are becoming more and more popular thanks to its potential benefits.

After the discovery of CBN, it was widely believed that it is only an inactive component of cannabis. Over the years, it has been proven that this substance has many medicinal benefits.

Unfortunately, at the moment, we do not have many studies on CBN. Most of the supposed health benefits attributed to this compound are based on limited research that does not definitively prove the medical benefits of taking CBN. However, according to research that has been conducted so far, cannabinol is a natural compound offering the following properties:


CBN might also increase the euphoric effects of THC, according to an old study dating back to the 1970s. However, like the other claims about CBN, it hasn’t been proven sufficiently.


Is CBN a sedative?


Cannabinol is often sold as a "strong sedative", but that claim is far-fetched. While some people report that older hemp plants have stronger sedative and sleep-inducing effects, it is unclear whether CBN produces this effect.

The above-mentioned human studies conducted in the '70s involved giving participants CBN and measuring their sleepiness. None of the participants reported that it made them more tired.

Apart from these research approaches, there is no evidence that CBN is a sedative.

How to take CBN?

When it comes to using the benefits of cannabis, it's always important to talk to an experienced doctor before taking any cannabinoid. Because it hasn’t been researched thoroughly, we can’t be sure of how safe CBN is or what dosage of CBN you should use. 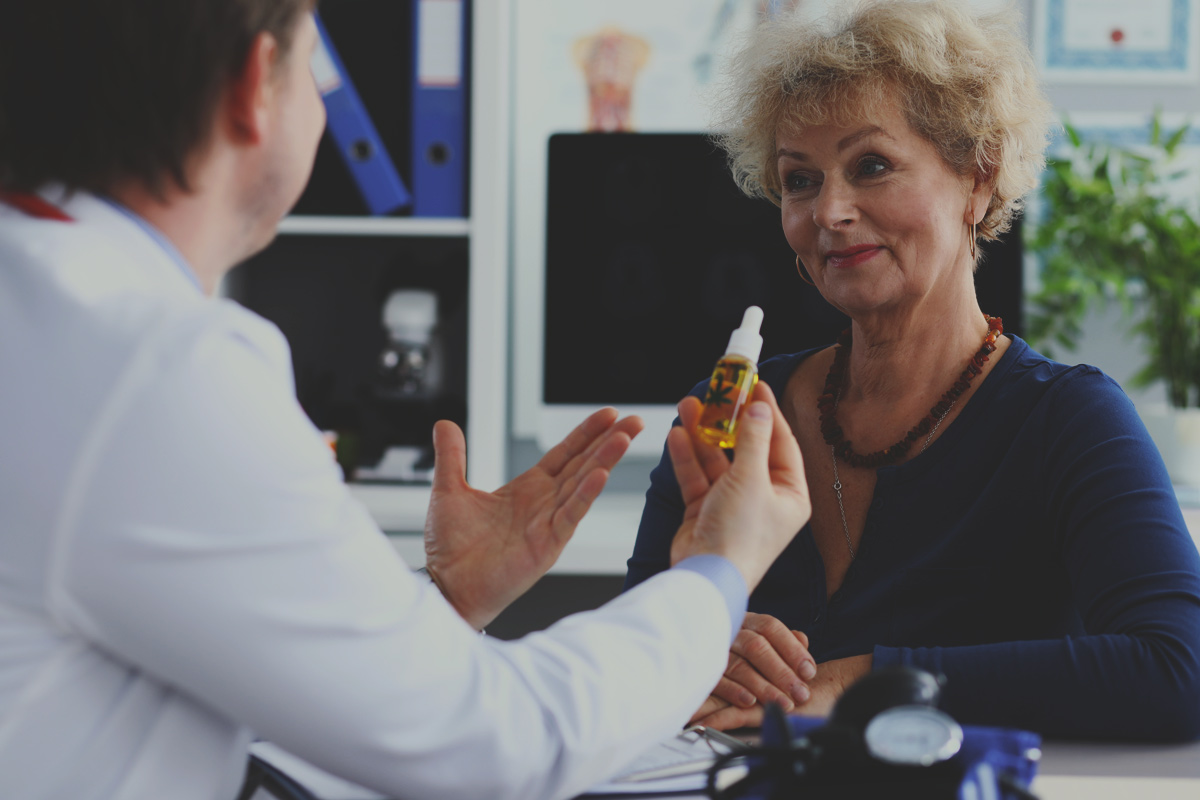 Side effects of CBN

Although they are mostly harmless, all cannabinoids have some side effects if consumed in high doses. CBN is, therefore, no exception. CBN side effects are very similar to CBD. Inexperienced users who consume too much CBN at once may experience undesirable effects such as:


However, these mild side effects can be easily avoided by scrupulously measuring the dose and increasing it gradually.


You will find CBN in our full spectrum oils.
Choose one of the Eir Health products: