Almost every cannabinoid has its own acid form. But are the acid forms of cannabinoids just passive links of the hemp chain? As it turns out, these substances also have many interesting properties. This is proved by the case of CBDa - an acid precursor of the well-known CBD.

Isolated for the first time in 1996, CBDa is an acid precursor of cannabidiol (CBD) - one of the most-appreciated cannabinoids in many respects. It is also one of the many organic compounds produced by cannabis plants, whose healing properties have been appreciated in the medical world, but also elsewhere.


How is CBDa formed?

All cannabinoids start as cannabigerolic acid (CBGa), the mother of all cannabinoids, which can then transform into any cannabinoid under the influence of various factors. CBGa is synthesized by a living cannabis plant into other acid forms of cannabinoids such as THCa lub CBDa. or CBDa. In the next stage, the remaining cannabinoids are formed. We know them under their final names (CBD, THC, CBN, CBC itd.) To obtain popular cannabinoids, these acid forms must be subjected to a decarboxylation process, and thus subjected to a heating process to change their molecular structure. Only when a plant or CBD substance is heated to about 120 Celsius degrees, does it become CBD. This synthesis also occurs at a lower temperature, but less efficiently. 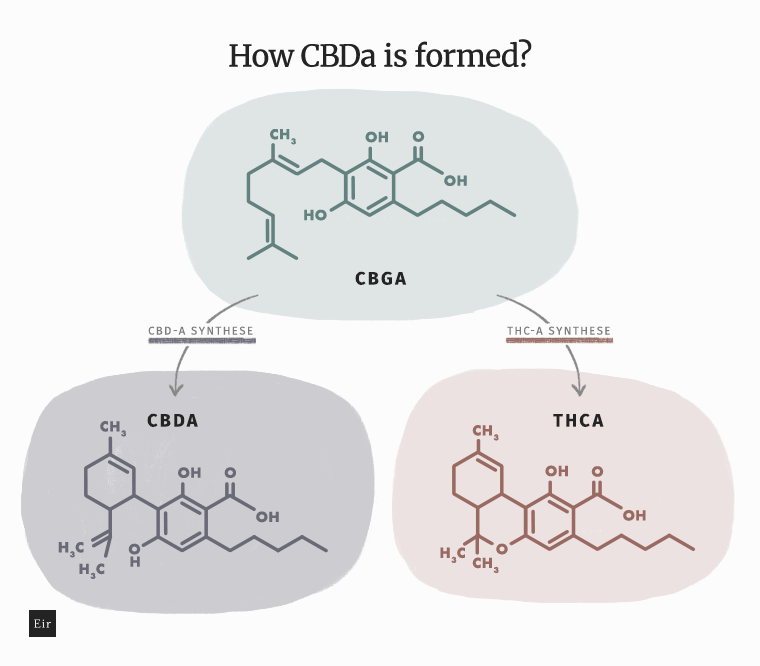 The difference between CBD and CBDa

Since these substances are so interrelated, is there any difference between CBD and CBDa? It turns out that these compounds have many more similarities than differences. And that's hardly surprising.

Both of these cannabinoids affect each other. CBDa as an acid precursor to CBD, determines its formation in cannabis. When these plants are in the growth phase, they produce this compound (CBDa), not CBD.

CBDa and CBD are not intoxicating. Therefore, these substances are safe in their daily use.

However, much more detailed research has been conducted on CBD, which is why the medical community is more confident in its positive properties and is more likely to use the potential of this compound than CBDa. That is why much less is heard about cannabidiol acid.

How does CBDa work?

As for CBDa, the healing effect of this cannabinoid on the human body is still not fully understood. What we know for sure today is that CBD:


The healing effect of CBDa

Although CBDa was initially seen as an inactive compound, this state of affairs has changed significantly. Currently, there are several scientific studies confirming the healing properties of cannabidiol acid.

The potential health benefits of CBDa may include:


The research is way too limited to confirm whether these reported benefits of CBDa are real. In most cases, it has been tested on animal subjects but not on humans. We’d have to have large clinical studies on humans before we’re sure of the health benefits of CBDa.

However, for now many people consider CBDa to be an excellent medicinal substance, as well as a supplement used to improve overall health.


Where to look for CBDa?

Currently, more and more products containing cannabidiol acid appear on the market. The ideal solution are full spectrum CBD oils, such as those in our offer. It is worth getting this organic compound from a reputable company that regularly tests its products in a laboratory.

If you plan to incorporate CBDa into your daily life, it is always good to talk to a doctor, who will be able to dispel any possible doubts about the use of cannabidiol acid.


You will find CBDa in our full spectrum oils
Choose one of the Eir Health products: